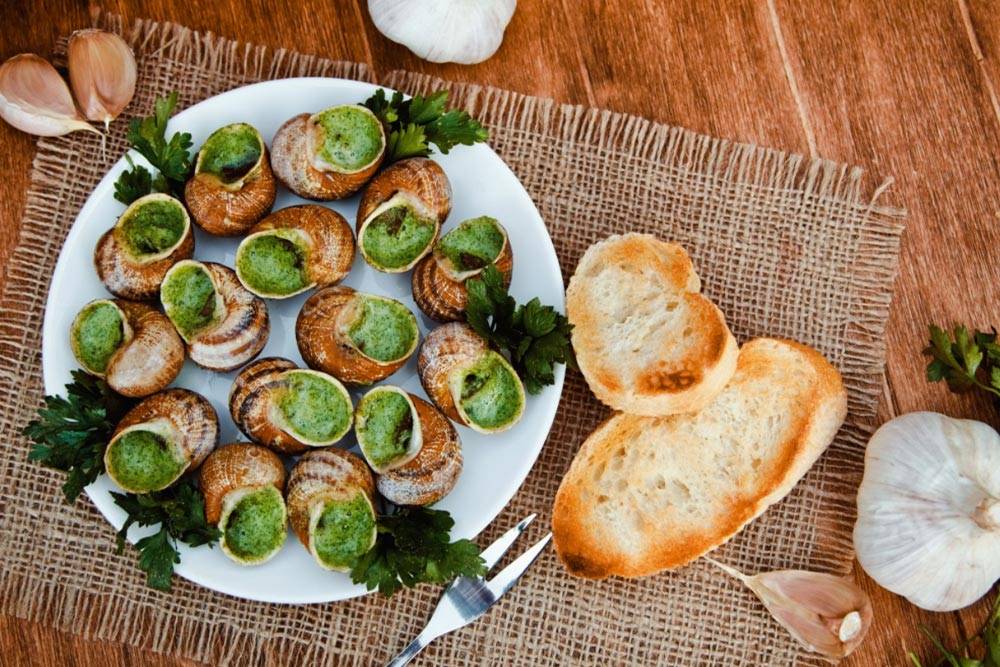 Before you decide to take one look at the title and click off, let us explain why escargot is not something you want to miss out on! After all, it’s not a renowned delicacy in many countries for nothing - there has got to be a reason why so many people love it, right? So, let’s find out together what escargot is and what makes it so popular among all the foodies!

Escargot is French for snails but not just any snails - the word is mostly used to refer to several types of edible land snails, and, apparently, it has been a part of the French language in its current form since 1549.

However, people have been consuming snails for a lot longer - way over 30 000 years ago! There are snail shells dated back to prehistoric times that archeologists have found around the Mediterranean region, so it’s safe to assume that we as a species are not as unfamiliar with escargot as some of us might think! Romans even thought of escargot as an elite food, allotted only to the most renowned citizens - little did they know that in only a couple thousand years, we’d be giving their beloved delicacy a quizzical brow and refusing to go anywhere near it!

And while it’s hard to pin down the first place or form that escargot was consumed in, we can safely say that whoever came up with the idea did a pretty good job because these little goodies have a great nutritional value! They are mostly (around 80%) water and have a bit of fat, but more importantly, they have about 15% of protein, which makes escargot an ideal addition to most meals - although, due to their luxurious nature, mainly the celebratory ones!

Are all snails edible? Well, no, actually, most snails aren’t edible, so we can’t just go and pick some up on the side of the road after a rainy day for our dinner; however, there are still quite a few that are safe to eat, and their taste also varies from one to the other. The most commonly consumed escargot is Helix pomatia, followed by Cornu aspersa and Helix lucorum. They are widely famous in France, Spain, Italy, parts of India and, more and more, in the USA as well! Since the 1980s, escargot has not only been popular in the States, but it has turned into a multimillion-dollar business; there is even a day dedicated to it - the 24th of May is officially the national escargot day in the US!

How to Cook Escargot? 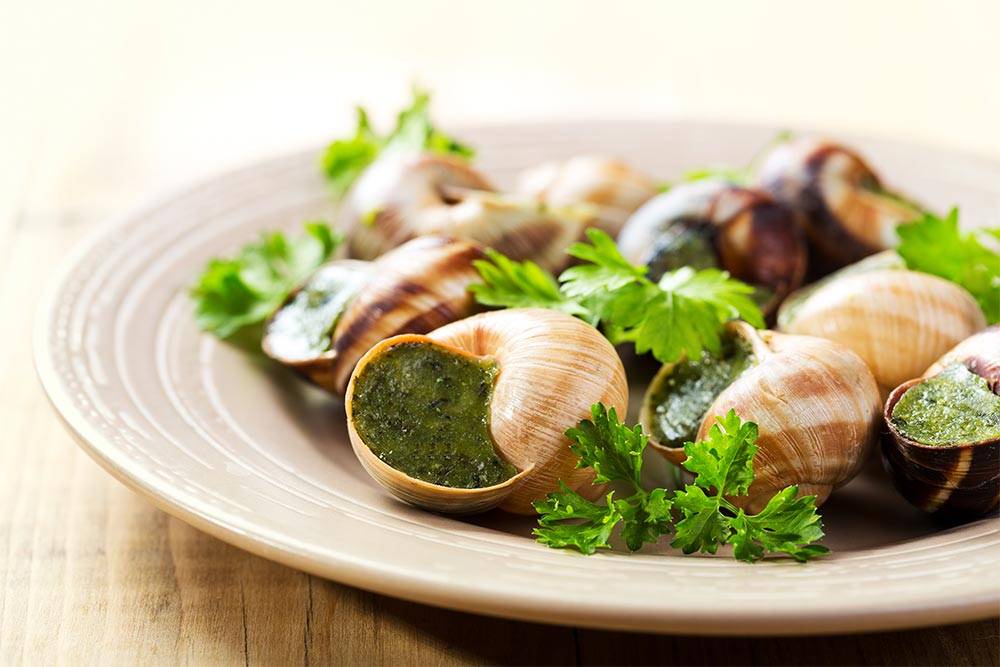 What is the difference between escargot and snails? Unsurprisingly, that is the question that comes up pretty repeatedly when discussing this product. To put it simply, when talking about escargot, people are usually talking about the actual dish - prepared and ready to eat, while snails could mean anything from cooked food to, well, actual living snails.

Another frequently asked question is what does escargot taste like, and the false expectations we have around the answer to that question are probably the reasons why so many people avoid this delicacy. The truth is, escargot is a lot chewier than you’d expect, and it’s not as slimy and weird as most people think it would be. The taste is pretty mild and usually takes on the flavors you decide to add pretty well, and the texture is a lot more satisfying than you’d expect!

How are escargot cooked?

More often than not, in order to be prepared, escargot is removed from the shell, cooked with different ingredients, mainly butter and garlic, and put back into the shell with some sauce to be served. You are probably familiar with tiny forks with two prongs that are usually used to take deshell them while eating - and now you know what they’re for!

If you’re thinking about following a classic recipe to cook some authentic French escargot, you can always go to our burgundy escargot recipe and create a stunning meal without too much effort! Just make sure to have some premium quality escargot at hand, and you’ll be good to go! Want an option with even less hassle? Go with our ready-made burgundy escargot by Saveurs de la Terre, pair them with a wine of your choosing, and enjoy every bite!

Where to Buy Escargot? 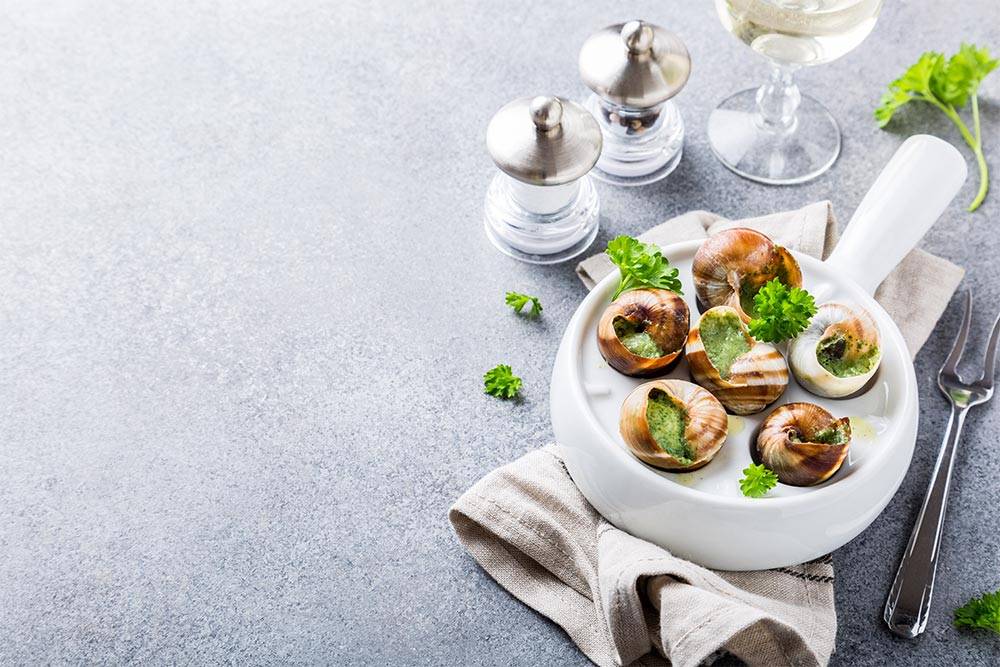 From classic French variations like extra-large wild escargot to Spanish caracoles - snails in brine, everything you need to enjoy these stunning delicacies awaits in Yummy Bazaar’s carefully curated selection of escargot from all across the Mediterranean shore! Whether you are planning on cooking a luxurious meal on your own, planning to celebrate a big event, or just want to give the world’s one of the most intriguing delicacies a go, our selection is at your service!

And, if you happen to like the way most escargot recipes usually display their star ingredients, you can always get your hands on some French snail shells and find as many creative ways of using them in your plating as possible! From classic use - after all, having a backup in case some of the shells accidentally get tarnished - to stuffing them with creations of your own, or even using them for a fun prank to pull on your dinner guests, the possibilities are endless!

As long as you don’t knock them until you’ve tried them, we’ll be happy! Buy escargot online at Yummy Bazaar, have it delivered to your door, and start cooking bold delicacies right away!